How the Hawaii Sunscreen ban could have been avoided?

Recently the Hawaii Government passed their first bill in the country that will ban sunscreens that contain chemicals harmful to coral reefs, which is effective from January 1, 2021.
Articles
Case Studies
Interviews/Podcasts
Blog
Press
Demos
February 14, 2021

Recently the Hawaii Government passed their first bill in the country that will ban sunscreens that contain chemicals harmful to coral reefs, which is effective from January 1, 2021. This means that any sunscreen formula that contains oxybenzone and octinoxate, that helps filter UV rays will be prohibited in the country.

A study in 2015 by Haereticus Environmental Laboratory, a not for profit scientific organization, found that the chemicals present in the sunscreen cause bleaching, DNA damage deformities,and ultimately death in coral reef when these chemicals are washed off beachgoers or discharged into wastewater plants and deposited into bodies of water. The study also states that these chemicals can induce some feminism characteristics in adult male fish and lead to an increase in diseases from creatures like sea urchins, parrotfish and other similar mammals. In addition it can harm the neurological behavioural changes in fish which in turn can have a more detrimental effect on other endangered species like sea turtles found in the Hawaiin waters.

Oxybenzone and octinoxate are the main ingredients used in the sunscreen as they offer skin protection from burns and potentially cancer as it absorbs the harmful ultraviolet radiations before it reaches our skin. But at the same time these chemicals have also proved to damage coral reef’s DNA, as it impairs the coral reproductive system and makes it harder for them to heal after a breakage.

Oxybenzone chemical is especially more toxic for the juvenile form of corals and this is consistent with the dogma of toxicology that juveniles are usually a thousand times more sensitive to the toxic effects of a chemical than a parent.

How the ban could have been avoided? 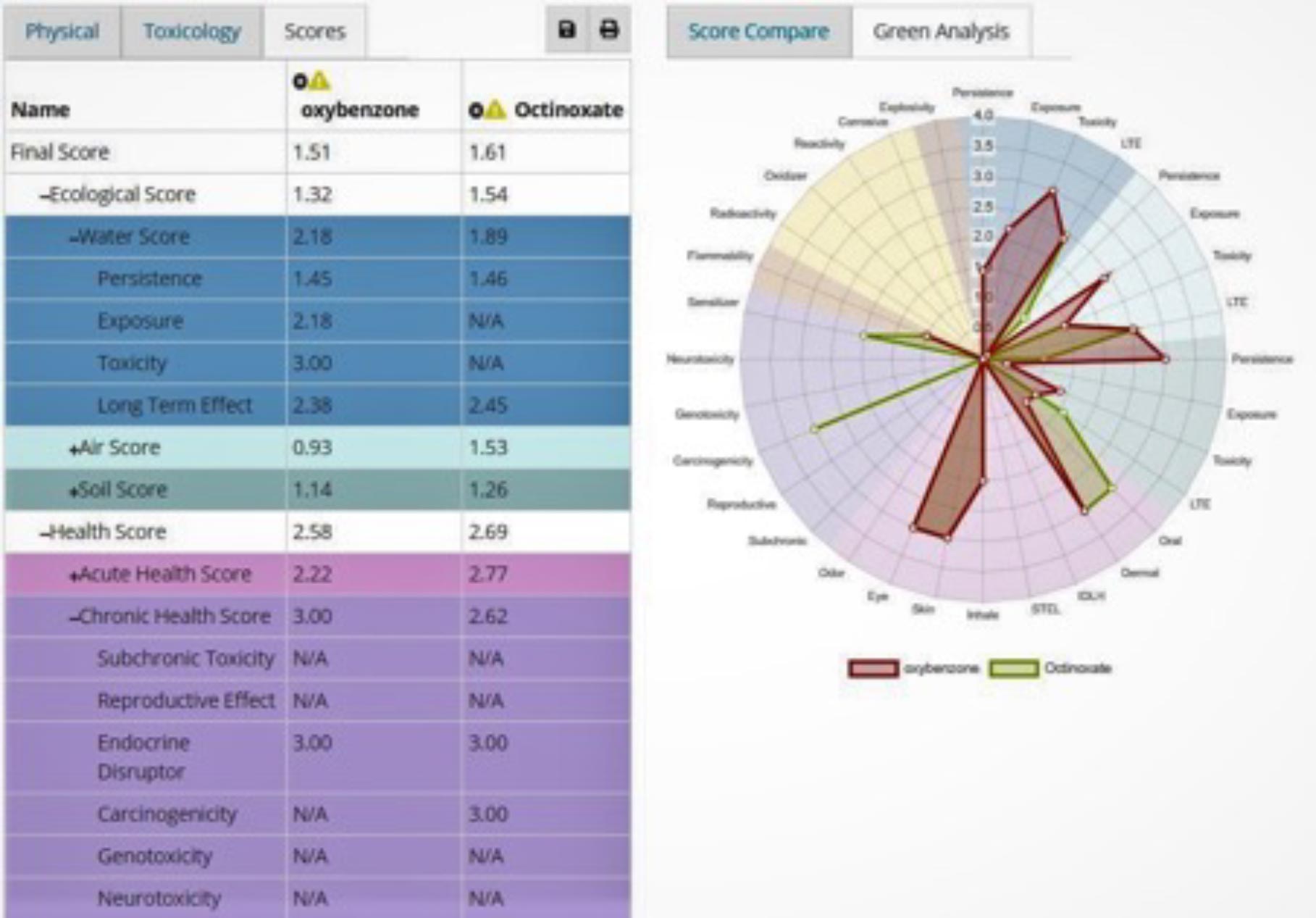 The Chemical Analyzer also has the capacity to search for similar and less toxic chemicals and even predicts the toxicity of novel chemicals in real time, allowing users to explore both tested and untested alternatives (register for a FREE trial).

“With the recent focus of chemical toxicity impact on humans, animals and environment, and awareness of the devastating impact it has caused in many cases, Governments worldwide are adopting stricter regulations. As a result, companies are re-evaluating their production processes and trying to see how they can avoid product recalls by replacing the use of toxic chemicals with less toxic alternatives. But availability of comprehensive toxicity information is a critical issue. Even though the United Nations, US-EPA, EU-REACH are spending more resources to provide in-silico predictive information on the chemicals, covering the number of chemicals existing today is a major challenge.”

“This is one of the main reason we started ViridisChem to help scientists define sustainable and green product development, and help them make critical decisions on what to use and what to avoid.” says Neelam Vaidya , CEO of ViridisChem.

ViridisChem is a software company offering essential toxicity data and tools for companies to move towards sustainable product development.

We have the world’s most comprehensive toxicity database with over 90 million chemicals, and utilizing this data, our software tools provide toxicity analysis of chemicals, mixtures and formulations, and product development processes.

October 21, 2022
Dr. Niteen Vaidya is the founder and CTO of ChiroSolve; an well-known industry expert in chiral resolution with over 30…

October 21, 2022
Discussion with Dr. Heinz Plaumann, retired executive from BASF and well-known industrial toxicity expert.…
We use cookies on our website to give you the most relevant experience by remembering your preferences and repeat visits. By clicking “Accept”, you consent to the use of ALL the cookies.
Do not sell my personal information.
Cookie SettingsAccept
Manage consent

This website uses cookies to improve your experience while you navigate through the website. Out of these, the cookies that are categorized as necessary are stored on your browser as they are essential for the working of basic functionalities of the website. We also use third-party cookies that help us analyze and understand how you use this website. These cookies will be stored in your browser only with your consent. You also have the option to opt-out of these cookies. But opting out of some of these cookies may affect your browsing experience.
Necessary Always Enabled
Necessary cookies are absolutely essential for the website to function properly. These cookies ensure basic functionalities and security features of the website, anonymously.
Functional
Functional cookies help to perform certain functionalities like sharing the content of the website on social media platforms, collect feedbacks, and other third-party features.
Performance
Performance cookies are used to understand and analyze the key performance indexes of the website which helps in delivering a better user experience for the visitors.
Analytics
Analytical cookies are used to understand how visitors interact with the website. These cookies help provide information on metrics the number of visitors, bounce rate, traffic source, etc.
Advertisement
Advertisement cookies are used to provide visitors with relevant ads and marketing campaigns. These cookies track visitors across websites and collect information to provide customized ads.
Others
Other uncategorized cookies are those that are being analyzed and have not been classified into a category as yet.
SAVE & ACCEPT